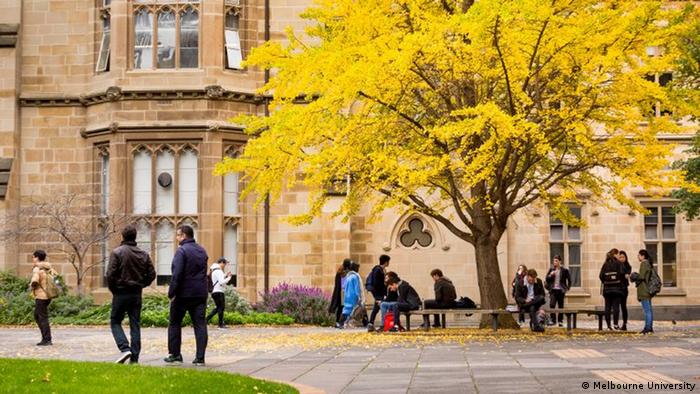 Today, we are going to consider some top ranked universities in Australia according to the latest world ranking.

There are many popular universities in Australia, all of which are highly ranked and well-known around the world, providing you with numerous opportunities to meet some of the top professors and teachers. University of Queensland, University of Adelaide, Charles Darwin University, and University of Tasmania are all at the top of the rankings. Consider travelling to Australia if you’re seeking for the best law schools, business schools, medical schools, or engineering institutions with the best reputations to enroll in for your Bachelor’s, Master’s, or Ph.D.

Let’s now look at the top universities in Australia, their average tuition fees and rankings.

The University of Melbourne is an Australian public research university in Melbourne. It is Australia’s second oldest university, and the oldest in Victoria, having been founded in 1853. It has numerous sites throughout Victoria, with its main campus in Parkville, an inner neighborhood north of Melbourne’s central business area.

The University of Sydney (USYD, or Sydney Uni as it is known informally) is an Australian public research university located in Sydney, Australia. It is Australia’s first university and is recognized as one of the world’s leading universities, having been founded in 1850. The university is one of the six sandstone institutions in Australia. The British Daily Telegraph and the American Huffington Post have named its campus, which spans the inner-city suburbs of Camperdown and Darlington, in the top ten most beautiful institutions in the world. The university offers bachelor’s, master’s, and doctorate degrees through its eight academic faculties and university schools.

The Australian National Institution (ANU) is a public research university in Canberra, Australia’s capital. It has seven teaching and research colleges on its main campus in Acton, as well as other national academies and institutions.

The University of Queensland (UQ, or Queensland University) is an Australian public research university based principally in Brisbane, the state capital. UQ is one of the six sandstone universities, an informal title for each state’s oldest university, which was founded in 1909 by the Queensland parliament.

Through a college, a graduate school, and six faculties, the university offers associate, bachelor, master, doctoral, and further doctorate degrees. The Institute for Molecular Bioscience, Boeing Research and Technology Australia Centre, Australian Institute for Bioengineering and Nanotechnology, and the UQ Dow Centre for Sustainable Engineering Innovation are among the over one hundred research institutes and centres that offer research programs at UQ.

The university’s recent important research includes inventing high-performance superconducting MRI magnets for portable scanning of human limbs, pioneering the design of the HPV vaccination that protects cervical cancer, and producing a COVID-19 vaccine that was in human trials.

University of Queensland tuition fees: The annual tuition fees charged by this university ranges from AU$28,000 to AU$40,000.

Monash University is an Australian public research university based in Melbourne. It was formed in 1958 and is the state’s second oldest university, named for famed World War I general Sir John Monash. The university has four campuses in Victoria (Clayton, Caulfield, Peninsula, and Parkville), as well as one in Malaysia. Monash also has a research and teaching center in Prato, Italy, as well as graduate research schools in Mumbai, India, and Suzhou, China. Monash University offers courses in a variety of locations, including South Africa.

The Monash Law School, the Australian Synchrotron, the Monash Science Technology Research and Innovation Precinct (STRIP), the Australian Stem Cell Centre, the Victorian College of Pharmacy, and 100 research centres and 17 co-operative research centres are among the university’s major research facilities. Its overall revenue in 2019 was above $2.72 billion (AUD), with $462 million in external research revenues. Monash University enrolled around 55,000 undergraduate and 25,000 graduate students in 2019. It receives more applications than any other university in Victoria.

Monash is a member of Australia’s Group of Eight research universities, the ASAIHL, and the M8 Alliance of Academic Health Centers, Universities, and National Academies, and is the only Australian member of the M8 Alliance. Monash University is one of only a few Australian universities to be included in the École des Mines de Paris (Mines ParisTech) ranking, which is based on the number of alumni who are CEOs of the world’s 500 largest corporations. In the QS World University Rankings, Monash is consistently rated within the top 55–70 universities in the world.

The University of New South Wales (UNSW; sometimes known as UNSW Sydney) is an Australian public university with its main campus in Kensington, a Sydney suburb. The university offers bachelor’s, master’s, and doctorate degrees through its seven faculties.

The main campus is located in Kensington, a Sydney suburb 7 kilometers (4.3 miles) from the Sydney CBD. UNSW Art & Design, the creative arts department, is based in Paddington, with subcampuses in the Sydney CBD and numerous other areas, including Randwick and Coogee. The University Of New South Wales has a number of research sites spread across the state.

UNSW is placed 20th in the world for Law, Accounting, and Finance, and first in Australia for Mathematics, Engineering, and Technology, according to the QS World University Rankings by Subject for 2021. UNSW also leads Australia in medicine, with its Medical School students having the highest median ATAR (Australian university entrance examination score) of any Australian medical school. UNSW enrolls the most top 500 high school students in Australia and produces more millionaire graduates than any other university in the country.

The university has four campuses: one in Melbourne, Victoria, and three in South Australia: North Terrace campus in the city, Roseworthy campus in Roseworthy, and Waite campus in Urrbrae. Other locations where the institution operates include Thebarton, the National Wine Centre in the Adelaide Park Lands, and the Ngee Ann-Adelaide Education Centre in Singapore.

Five Nobel Laureates and 110 Rhodes Scholars are linked with the University of Adelaide, which accounts for one-third of Australia’s total Nobel Laureates. Many of the state’s major businesspeople, lawyers, medical professionals, and legislators have been educated at the university, which has had a significant impact on the state’s public life. Many noteworthy achievements and discoveries have been linked to the institution, including the discovery and development of penicillin, space exploration, sunscreen, the military tank, Wi-Fi, polymer banknotes and X-ray crystallography, as well as the study of viticulture and oenology.

University Of Adelaide tuition fees: The University of Adelaide charges between AU$42,000 to AU$51,000 per year.

The University of Technology Sydney (UTS) is an Australian public research university in Sydney. Although the university’s roots can be traced back to the 1870s, it was created in its current form in 1988. UTS has 46,259 students enrolled in its nine faculties and schools as of 2019.

The university is considered as one of the world’s leading young universities (under 50 years old), with the 2021 QS World University Rankings placing it first in Australia and 11th globally. The Australian Technology Network, the Association of Southeast Asian Institutions of Higher Learning, and the Association of Commonwealth Universities all include UTS as a member.

The University of Canberra (UC) is an Australian Capital Territory public university located in Bruce. The campus is a short walk from Westfield Belconnen and 8.7 kilometers (5.4 miles) from Canberra’s Civic Centre. Health, Art and Design, Business, Government and Law, Education, and Science and Technology are among the five faculties that UC provides undergraduate and postgraduate studies.

This is how far, we will go on this article; Top Universities In Australia. You can contact the university and get more information about the admission processing and program specific requirements. Kindly share it by using the sharing buttons below so others can also learn.